Background, Considerations, and Procedure for Changing Superintendent of Highways from an Elected Position to an Appointed Position in the Town of Germantown, Columbia County, New York

As of 2020, more than 95 towns in the State of New York appoint their Highway Superintendents.  It is generally thought that the position of Superintendent of Highways is fundamentally apolitical in the sense that all residents need and deserve safe roads and bridges, efficient snow removal, and well-maintained Town parks, buildings, and grounds.  By replacing the elected position with a Town Board-appointed position, the Town Board seeks to ensure greater oversight and accountability in operation, function and responsibility of upkeep and maintenance of Town highways and other Town-owned property, and to attract a wider applicant pool for the position of Superintendent of the Department of Public Works.  We are simply attempting to plan for the future, not casting stones into the past.

To change the position from elected to appointed, the Town Board was required to hold a public hearing (held on April 13, 2021, at 6:45 p.m. via Zoom) and adopt the local law.  This local law is subject to a mandatory referendum, requiring approval of residents of the Town of Germantown who are qualified to vote at a special election.  There is a special election on LL#1 of 2021 on Saturday, June 19, 2021, from 9am to 3pm at the Kellner Community and Youth Activity Building, 54 Palatine Park Road, Germantown, NY.  A “yes” vote indicates approval of the change to an appointed position, rather than an elected position.  A “no” vote indicates disapproval of the change.  If the local law is approved by voters, the Town will work with the State and Columbia County Civil Service to determine the civil service job classification, after which there will be a committee formed and appointed to interview all qualified candidates for said position.

The following chart highlights some of the differences in elected versus appointed positions: 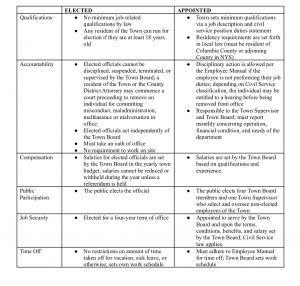